Discover new books on Goodreads
Meet your next favorite book


it was amazing
bookshelves: historical

This story was an eye-opener. It deals with the topic of Leprosy also known as Hansen's disease...

Frankly speaking I never thought much about Leprosy and ashamed to say neither did I know much about this disease. The only thing that came to mind when hearing the word Leprosy is distorted features.....

This story is based in the late 19th century when Leprosy was a major disease and there was no known cure for the same.
This is a fictional story of a Leprosy patient based on true historical events. This can be an issue for some of the readers but I was fine with this as the fictional part of the story was blended well with the political and social changes happening during that time. Also as per the Author's note at the end, the story was well researched and few of the supporting characters have reference to real people living at that time period

The story start's with Rachael a 5 year old, her loving but strict mother, her loving elder siblings and her father who is a sailor traveling foreign lands most of the time but adores Rachel a lot. When she is afflicted with Leprosy at the age of 6, we see how she is torn away from her family and how this disease effects her family dynamics. How people with religious belief's at that time believe this is a result of sin in individuals and how the whole family is shunned. It was heart-breaking to see a young child, baffled by everything that is happening to her and the treatment she receives because of something that is no fault of hers. Leprosy is not just a physical disease but it effects the patients and the people close to them mentally as well.

She is torn away from her family and sent to Moloka'i- A Leper Colony. In real, there was an actual leper colony in Mokola'i and the folks affected by Leprosy were transported there and declared dead in the society.
Here slowly and gradually she forms a new life which is not very simple when there is malady and death all around. We are taken on a journey with Rachel and see things through her eyes for her life span. There are unlikely friendships formed, love found, hope & happiness found even in dire conditions.

There were many true historical events such as America taking over Hawaii and downfall of the Hawaiian Royal family, World war, New technological advancements, Natural disasters and finally a Breakthrough in the cure of this dreaded disease.
Each event is very well interwoven with our story and we see how these big events have an impact on the Leper colony.

There is also an aspect of people from different religions such as Christianity, Buddhism and the old Hawaiian ways staying together and respecting each others belief's.
Stories of Hawaiian folklore has been blended in the story, which I found really interesting and it had me googling and reading more about it.

This book was not a simple story for me but much more as it made me aware of a lot of things I had no idea about (I was actually online searching a lot of events and stories described in this book)
Below is an actual live photo I found online of the Leper Colony of Moloka'i. At present there are still a few patients living there. 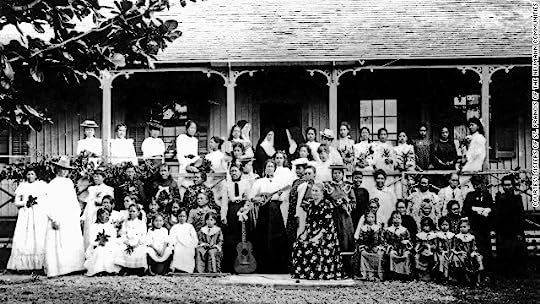 The book can feel long sometimes but I will still recommend this book to anyone who want's to read a different story which at times distressing can still provide hope.
40 likes · Like ∙ flag

“She already felt dead in everything but name. What remained to be taken from her? She longed to be enfolded, welcomed, into the earth - to breathe no more, love no more, hurt no more”
― Alan Brennert, Moloka'i
tags: death, earth, lost, sleep, suicide
56 likes

“Love, marriage, divorce, infidelity... life was the same here as anywhere else, wasn't? She realized now wrong she'd been; the pali wasn't a headstone and Kalaupapa wasn't a grave. It was a community like any other, bound by ties deeper than most, and people here went to their deaths as people did anywhere: with great reluctance, dragging the messy jumble of their lives behind them.”
― Alan Brennert, Moloka'i
tags: community, death, life
10 likes

“After a while the fear became a constant, cold companion, a simple fact of existence.”
― Alan Brennert, Moloka'i
9 likes

“She had never been afraid of the dark, but then she had never known a dark like this before.”
― Alan Brennert, Moloka'i
9 likes

“...and all they could do was sit, sleep, eat, and be reminded day after day, night after night, of their disease and eventual death.”
― Alan Brennert, Moloka'i
8 likes

“Isn't it strange, how one so afraid of contracting a fatal malady...should so earnestly wish for death, as well?”
― Alan Brennert, Moloka'i
tags: death, malady, suicide
5 likes

Have a great week and happy reading"

Thanks Candy. Happy weekend to you too xx

Great review Poonam! I'm glad you enjoyed this book, I will have to check it out!

Vaneesha wrote: "Great review Poonam! I'm glad you enjoyed this book, I will have to check it out!"

Thanks Vaneesha:) Do check this out if you get a chance!

Thanks Garima. It was a pretty Amazing read too!

Such a beautiful review, Poonam! It sounds like a must-read book.

Mansuriah wrote: "Such a beautiful review, Poonam! It sounds like a must-read book."

Thanks Mansuriah, it is a very good read and you should give this one a try!

That is a lovely review Poonam!

Ritu wrote: "That is a lovely review Poonam!"

Lauren wrote: "This has been on my tbr list for months. Better move it up the list."

Made me emotional though. Keep some tissues handy

I have been trying to get someone to buddy read Dangerous Girls with me (one of the books you recommended) but no one has volunteered yet. I'm just going to go ahead and read it without a discussion group thou if I can't find anyone willing in the next few days which is a shame. .

Lauren wrote: "Yes it looks like a heavy read. :(

I have been trying to get someone to buddy read Dangerous Girls with me (one of the books you recommended) but no one has volunteered yet. I'm just going to go ..."

Wait for a few days and if you don't find anyone go ahead. But I agree it's more fun to read mystery's with group discussions :)

Wow this sounds like a very interesting book! I'll check it out asap :)

Mathangi wrote: "Wow this sounds like a very interesting book! I'll check it out asap :)"

Nice review Poonam! I am adding it to my tbr !

Praveen wrote: "Nice review Poonam! I am adding it to my tbr !"


Search for a book to add a reference
add:    link cover

Flagging a post will send it to the Goodreads Customer Care team for review. We take abuse seriously in our discussion boards. Only flag comments that clearly need our attention. As a general rule we do not censor any content on the site. The only content we will consider removing is spam, slanderous attacks on other members, or extremely offensive content (eg. pornography, pro-Nazi, child abuse, etc). We will not remove any content for bad language alone, or being critical of a particular book.